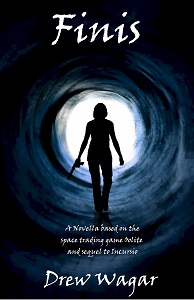 This is a Novella based on Oolite, the sequel to 'Incursio' by Drew Wagar and the fourth and final part of the Oolite Saga.

"With the alien menace poised to overthrow the galaxy a lone group of combateers is all that that stands between them and total annihilation. When one of their number is kidnapped by the aliens and their plans thwarted, the group must decide whether to mount a rescue and risk losing the war, or sacrifice her for the greater good of humankind…"