Difference between revisions of "Docking Computers"

By the time most Jamesons have acquired enough credits to afford this piece of equipment, they have learnt to dock manually with their optical receivers obscured (or were scraped from a dockingbay by auto-shovels). Nevertheless, this is a useful piece of AI to install in your vessel if you do not have a copilot, who can take over the helm should you feel an urgent need to visit the captains recreational cubicle. (Be advised that voiding the ships sanitation tanks while in dock or in the process of docking is prohibited and will be fined according to GalCop Art.2, sec.4a "unsanitary behaviour" and Art.1,sec.5 "vandalism of GalCop property" - punishments include cleaning the docking area of such noisome jetsam.) 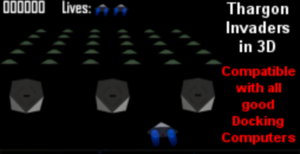 Another use for Docking Computers...

The SinCorn RemLock D&A System is a sophisticated and expensive piece of gadgetry. It comes with MemmSomn Pilot Interaction to induce hi-cram sleep during the maneuvre.

Press c ("c") on your control console to activate, and to deactivate. Autopilot will approach the station, ask for clearance and line up in the queue at the docking beacon and eventually dock. Pressing c ("c") will also contact any targeted ship or station rather than the main station, permitting auto-docking with large vessels and non-standard space-stations.

Docking computers can save on minor collisions and accidents which cost Commanders money. A tired Commander can easily make a minor mistake that will not destroy the ship but may damage valuable ship systems.

A soothing ancient melody will be replayed while activated as most space veterans get agitated at the slow and deliberate method of docking the AI uses, this can be switched on and off by pressing s ("s").

Holding shift and pressing c ("C") activates a hypnotic sleep inducer (MemmSomn Pilot Interaction) at the same time as the docking computers - this allows the pilot to sleep while the ship docks and awake refreshed when docking procedures are complete. This allows Commanders to devote more concentration on important commercial decisions once docked. Note, this option is not available with certain large vessels and non-standard stations.

Before the end of 2005, Oolite's docking computers were more exciting!