Difference between revisions of "BuoyRepair" 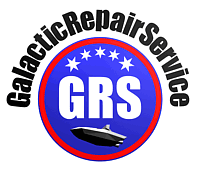 The authors of the GRS BouyRepair OXP (Cmdrs. Walch and Svengali) investigated the causes behind the slow replacement of bouys and found a systemwide shortage. Bringing in a new buoy from far away and installing it took so much time that in most cases the pilot reporting the destroyed bouy was already in another system when its replacement arrived. 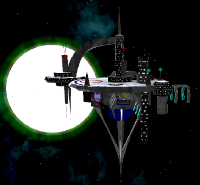 Walch and Svengali found that Industrial systems with a medium tech level were prepared to build buoys for a reasonable price. Low tech level systems didn’t have the skills to build the buoys, while high tech level systems considered the work to be beneath them. The availability of metal ore in the system was also a factor in selecting suitable production sites. Alloys for the construction of the bouys had to be readily available in the system. The buoys themselves are not strong enough to lift off a planet’s surface, so they have to be assembled in space.

Cmdr. Svengali designed a factory assembly station for assembling the bouys. Parts are pre-fabricated on the planet surface and are then flown to the assembly station in shuttles. These factories are in a constant need of alloys and will also buy alloys flown in from other systems.

The assembly stations have technologically advanced docking bay sealing: A force-field that keeps the air inside while allowing ships to pass trough. This makes it possible to load or unload ships with normal clothing instead of using pressurised suits. The disadvantage to this form of docking is that approaching pilots have no clear view of the landing bay and have to use special guiding technology to find the right flight path. Vehicles equipped with a docking computer are able to lock onto the assembly station's guidance beacon in the same way thry would with any orbital docking station.

Buoys are approximately the same size as a medium ship like a Cobra. This means they won’t fit in the cargo bay of most normal ships. Walch and Svengali realised a specialised spaceship carrier would be required to transport them. A craft large enough to carry the bouys in a hold was rejected as too expensive, with the authors opting instead for the lower-cost solution of towing the buoys. Cmdr. Svengali designed the Armadillo for this role: a powerful tugship capable of delivering the bouys to their positions at a reasonable speed. 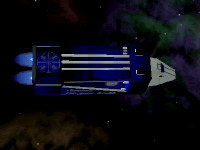 Download the file "buoyRepair1.02.5.oxp" and put it in Oolite’s AddOns folder. After a restart the new factories are in place and the distribution of the replacement buoys will start. Now, when a buoy gets damaged, a replacement sequence is started within 2 minutes. Sometimes replacement takes longer when traffic around stations is too busy. This is dependent on the local station manager’s ability to schedule dockings and launches.

The latest version of this OXP needs Oolite 1.72 or higher to work and is compatible with OXPConfig.