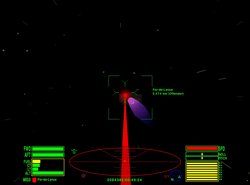 Fer-de-Lance will not escape - even with Witchdrive Fuel Injectors.

Witchdrive Fuel Injectors have one function: to make your ship go very very fast almost instantaneously. They do not boost you to the speed of your ship's hyperspeed, and unlike the hyperspeed, they continuously burn fuel to augment your inertialess prime mover. Although they are not as fast as the intra-system hyperspeed drive, they cannot be mass locked.

Witch fuel injectors are possibly one of the most versatile enhancements you can fit to your ship. They can be used for simple tasks such as speeding up the hyperspace exit procedure (inject away from the space station for a couple of seconds during hyperspace countdown to ensure you don't get the frustrating 'Too close to station' message and a failed jump), they can be used to reduce the time you spend mass-locked waiting to pass slower ships on your way to a planet's space station, and they can be used to enhance your combat performance. Many new combat tactics can be explored with the boost of the witch fuel injectors. The injectors can also be used to escape ECM hardened missiles which would otherwise cause severe damage or the destruction of your ship. They can be used to catch a fleeing pirate who would otherwise outrun your ship and mete out sweet vengeance.

You must bear in mind that the injectors require witch space fuel - and this comes from the same tank as your hyperdrive's supply. If you hyperspace to a system at the edge of your ship's range, you will have little fuel to use with the witch space fuel injectors. If you are intending to get into situations where it becomes necessary to use the injectors frequently, it is a good idea to plan hyperspace jumps to leave plenty of fuel for usage in the injectors. Typically, a third of a tank of fuel will last long enough for most purposes.